I mentioned earlier that we had a pretty amazing resident in the upstairs of our barn. It was a bushy-tailed packrat (one word is correct, according to most). Aren’t they cute?

The upstairs of our barn is a fairly well organized mess of a wide variety of building hardware in boxes. Some Marvin has accumulated in 30+ years as a remodeler, some came from the various shops and outbuildings we have since torn down, and some were even treasures I found at yard sales, like, joist hangers. Much of the stuff is shiny metal, something that packrats love. Especially this one.

But, apparently she believed in sharing, because rather than continue work on the first house, called a midden if you’re a packrat enthusiast, which we are not, she built a guest cottage.

That was it for us. We set up our Have-a-Heart trap, baited it with shiny metal stuff, and caught her. We drove her to a spot about four miles away and released her close to a pile of old railroad ties. We suspect she is busy pulling spikes from the track and constructing her new home.

We pondered how she carried all that stuff to her worksite. Looks like she may have made use of a trowel to gather up some bits. The trowel Marvin thinks came from downstairs, so she hauled it up the stairs and used it to sweep up her treasures? We’ll never know. We cleaned up the mess today. Merry Christmas!

February 14, 2017 UPDATE: We don’t visit the upstairs of the barn that often, and since I wrote this article, another packrat moved in. And she got serious. After trapping her, I spent several hours shoveling the messes into boxes and then sorting through it all. Most of it was for the metal recycler but I did find a lot of plastic plumbing parts that had gone missing from our storage downstairs. The nest was about 2-1/2 feet tall! All gone now, and we’ve got all our “stuff” in crates with lids now. Here are photos of the main mess. Surprisingly enough, the wire wasn’t chewed on, much. 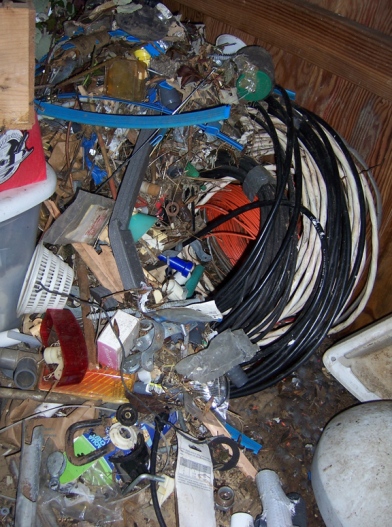 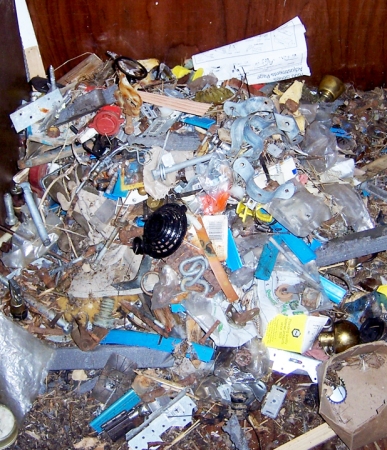