During my last trip to Carrollton, Alabama, I packed and shipped home a lot of stuff, including an old rocking chair from the Mullins family home. While it’s a cool old rocker, I didn’t want it for its antique value. According to family lore, this chair belonged to my great grandmother Virginia Corder Mullins, aka Miss Jenny. 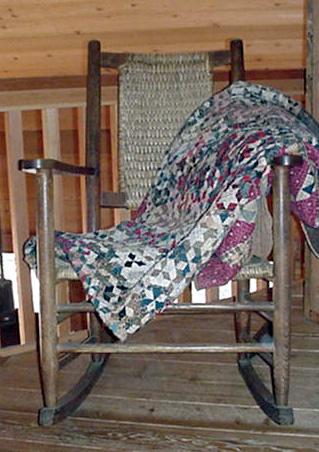 During my visit and in subsequent years, I heard a lot of stories about the Carrollton family clan. According to one story, Miss Jenny’s oldest boy, James Henry Mullins, came home drunk one night and got into a fight with his dad. I’ve heard various accounts, but everyone agrees that Jim Henry left home that night. And never came back.

One cousin claimed that Miss Jenny wore black from that day on, and when her many chores were done at the end of the day, she would sit in the rocker, watching out the window for her oldest boy to come home. That story is the reason I wanted the rocking chair.

So this weekend while searching through old photos, I uncovered two manuscript papers. I don’t know who typed them up, but the author is Jim Henry, written while he was stationed in the Phillipines during WWI.

I DREAM OF HOME
Ed’s note: * refers to a gnawed hole in the manuscript

I sat alone at midnight hours,
And watched the ***it sky:
And dreamed ** my mother say,
I wish my **
I know not where he is to-night,
He crossed the troubled main
But this I know, if life holds out,
He’ll wander back again.
Cho:
He’s coming home oh: joyful thought,
My boy no more will roam:
A letter here says mother dear,
I’m coming coming home.

He’s gone tho’ now, far far away,
Perhaps in deserts wild:
O? God to thee I pray to-night,
To keep my distant child.
No father there to guide him now,
No brother with his cheer,
No mother there to sooth his brow,
And no sister with her tears.
Cho:
I fancy now I see his face,
As fair as when a child
And he’s a full grown man to-day,
And true and brave, but mild.
A letter there says mother dear,
No longer will I roam;
So now I stand and watch the gate,
I know he’s coming home.

Alas? Dear friends t’was but a dream,
My mother’s here no more:
She left this world of sin and shame,
For Canaan’s happy shore.
Lord send some messenger of love,
To guide my wayward feet:
That I may meet my mother there,
Who’s waiting at the gate.
Cho:
A letter here says mother dear,
I’m coming home t’will not be long.
E’re I shall cease to roam,
And then I’ll join redemption’s song,
With mother dear at home.

Miss Jenny actually lived well into her 90s, and the family members who have researched Jim Henry believe that he died shortly after the war. Whatever the case, it appears that they both wanted to see each other again someday.