Today I turned in the finals for Robin Hood, at last! It was a tough one even though there were no people in it, but also I had taxes to do and some marketing catch-up, plus a new project came up, which is the real subject of this post. Here is a postage-stamp version of the 18 pages of finals: 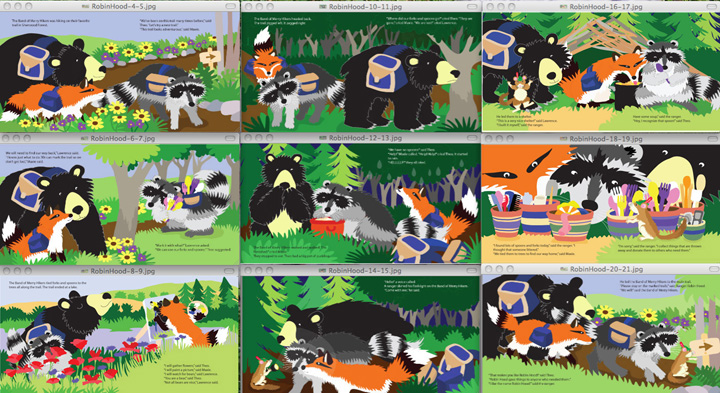 I spent the rest of the day dealing with a mouse infestation at the old mobile home where my office resides. I love the place because it’s on the farm and close to all the building activity, but it has a lot of holes in it, more each year as the building slowly rots away, so we deal with the critters that notice a warm place to hang out. One year, a western spotted skunk moved into the kitchen cabinets. That was an adventure…

So while I tossed mousy messes, I was also brain-working on ideas for the next project, a mystery story that involves dog search and rescue. I proposed the idea about eight months ago and last week I got the word to go ahead with it, and a contract is in the mail! I won’t say who it’s for at this point, but it’s younger middle-grade fiction and part of a well-established series. I have until Monday to turn in my outline for the 10-chapter book and the manuscript is due in June. Yeah, of this year. So? I love crazy deadlines!

The first middle-grade novel I attempted (at the time, I didn’t even know what it was, I was just typing) was called Willie, Find Him! and was about dog search and rescue. I was introduced to dog SAR via friends in Washington who were active as team members of Cascade Dogs with their giant schnauzers. It was so exciting and also gratifying to see how our dogs, our pets, could save our lives. I went home and wrote a pretty awful story on a rented Brother typewriter. I submitted it to a couple of places, and not surprisingly, nobody offered to buy Willie. That was okay, I still liked the idea. That was in 1988. 20+ years later, when given the opportunity to propose a mystery, I incorporated SAR into the story, and that’s where we’re at today.

Hey! Never throw away an idea you believe in. I’ll let you know how it goes.