I know a lot of other freelance artists, and it’s pretty much a given that without a carrot dangling out there as a reward, we tend to take our time. We’re not goofing off, oh no. We have the incredibly tough job of making final decisions about how a book is going to look in print. The more time we have, the more we ponder and worry. Writers go through the same thing, true, but since I do both, I vote that illustration is harder. See me after school if you want to argue about that. 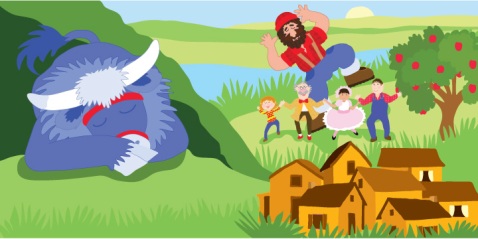 This is the end spread for Paul Bunyan, completed this morning. I had a blast coming up with my own version of these folk characters and hope the book does well. The story is linked to one of Rourke’s science titles, which made the project more challenging and fun.

Early on in my career, decisions were tough because with watercolor, there was no going back other than starting over. My first illustrated book, Pussycat Ate the Dumplings, was agonizing to complete. I needed help. We had an Amiga computer at the time, so I tried making a few color decisions using a cool $40 program called Deluxe Paint (this was in 1985). It was great! I could try out colors and make those excruciating decisions before committing to real paper. While I could spend hours deciding about colors, at least I could try them on for size. Once I decided, for instance, on a red dress and pink undies for the Queen (that book was published in the UK by the way), it was much more fun to paint!

Now that I’m creating illustrations on the computer almost exclusively, not only can I experiment with color and lighting, I can move objects, re-size and flip characters on their heads, and erase without white-out! It gives me a lot more confidence to try on different approaches, but truth be told, it is more time consuming than traditional painting. Why? Because there are so many freeking options!

So, that’s why a deadline can be a lifeline. Deadlines are not written to be broken or the carrot will go away. My recent projects have had some pretty fast deadlines, but this kind of schedule has taught me to stop waffling and make decisions on both the writing and the illustrating. This four-book project has a four-month deadline. I’m half-way there and making time for other projects. Funny how when time is precious, we make better use of it.